Located on a small street of the “Valley of Anton”, a charming little mountain town, is an adorable house in excellent condition with a beautifully landscaped garden. Completely renovated and enlarged in 2015, this adorable house consists of a small entrance, a comfortable living room with dining area and beautiful fireplace made of stones and bricks, a beautiful fully equipped kitchen and very functional, 3 bedrooms, each with private bathroom, and a beautiful covered terrace equipped with a huge stone barbecue, ideal for grilling on weekends.

This adorable house with its superb, perfectly maintained garden, will seduce you by its distribution, ampleness, charm, location and impeccable state.

Punta Barco Resort is one of the most exclusive… More Details 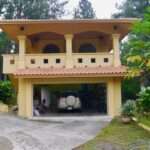