This beachfront fixer-upper house is really well located, on the main road of the beach. The house has about one hundred square meters construction, with two levels.

On the ground floor is a living room, kitchen, two bedrooms, bathroom with a shower and toilet, terrace, and a covered parking area for one vehicle. On the first floor is a large bedroom with a balcony and private bathroom. The plot is ​​600 square meters and is fully fenced. It has access to the beach and also has a small square pool.  The land is an old “Right of Possession” that the owners have recently made titled. It has electricity and water provided by the municipality. The house is situated about 10 minutes from the center from Chitré and less than 5 minutes from its airport

The house requires a complete renovation but the general structure is good. It needs and a new roof, new electrical and water systems, renovation of the kitchen, bathroom and the stairway to the first floor and repainting of both the interior and exterior. With well-constructed renovations, this small, well located house will be ideal for family weekends at the beach.

Chitré is a big city that is rapidly expanding, with its own airport and 2 direct flights a day to Panama. It has many good restaurants, several department stores and supermarkets (Riba Smith, Rey, Super 99, Machetazo, Novey, Do It Center, Tick, and car dealerships for all brands, hospitals and clinics (public and private), craft shops, museums and historic centers, golf courses, cinema and much more

… It is the capital or chief town of the province  of Herrera. It is located in the northeast of the Azuero Peninsula and, according to 2010 census data, has a population of just over 9,000, making it the thirteenth most populated municipality in Panama and the first on the Azuero Peninsula.  It’s called “the city growing up alone” and “the city ​​where no one is foreign”. The district of the same name is divided into five sectors: San Juan Bautista, Llano Bonito, Monagrillo, La Arena and Chitré (chief town). Chitre is connected to the Pan-american Highway in the city of  Divisa via the national avenue. It is the main communication hub of the province of Herrera and Los Santos. It preserves in its old city centre, a historical area consisting of houses, churches, squares, avenues and parks, as well as an important museum heritage. Among the cultural events celebrated are Holy Week of Chitra, the festivities of the patron saint, San Juan Bautista, and the carnival. 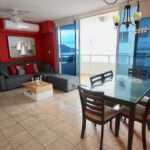